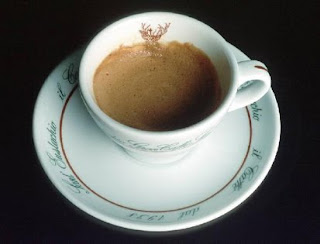 Romans are as fussy about their coffee as they are about their pasta. A debate about where one finds the best coffee in the Eternal City could go on for, well, an eternity. However, it’s fair to say that many discerning Romani would agree that excellent coffee can be found at Caffè Sant’ Eustachio, a small coffee-bar tucked into the lovely eponymous piazza famous for the church of Sant’Eustachio—recognizable by a large sculpture of a stag’s head that crowns the roof of the church, commemorating the 2nd century martyr who converted to Christianity when he saw a vision of Christ between the antlers of a deer he was hunting near Tivoli. The constant crowds of Romans spilling into the street, sipping caffè from tiny porcelain cups, lets you know that this piazza houses more than one great monument. Sant’ Eustachio is no secret; it’s a Roman institution, and that’s part of its appeal. Unlike other such establishments that rest on antiquated laurels, here you'll find one of the most consistently delicious and unusual espressos in Rome.

Founded in 1938, Caffè Sant’ Eustachio is currently owned by the Ricci family, who are intent on preserving the quality of the 4,000 cups of coffee sold there daily. Their espresso is like no other you'll find in the city. An amber-colored froth (schiuma) cloaks a viscous dark liquid that has a scent reminiscent of caramel—with a hint of some exotic spice (perhaps cardamom?). The taste is rich, luscious and buttery. It’s served sweetened, but purist can request to have it senza zucchero—true espresso aficionados claim that sugar masks coffee’s natural, aromatic quality. You could spend hours trying to figure out what is it that makes this espresso so extraordinary. But, alas you’ll never really know, since the recipe is a closely guarded secret.

I’ve tried on many occasions to pry the formula out of the caffè's baristi, who with their usual severity and professionalism answer dryly “è una segreta,” and don’t bother trying to steal a peek once they’re off performing their magic, since the espresso machines are fitted with stainless-steel shields that completely conceal both the mixture and method in which your caffè is made. On one of my daily excursions there (post caffè satiation), I struck up a conversation with the cafe’s manager Raimondo Ricci, whose close cropped beard gives him a professorial air. Raimondo is often found roosted behind the register where you order your piccolo or grande caffè speciale, and cappuccino (or purchase their roasted coffee beans in bags of 1000, 500, 300, and 200 grams). It was unusually quiet, so I struck up the courage to ask him how he managed to serve one of the best espressos in Rome? He smiled, amused by my enthusiasm, and asked if I was American. I gave an affirmative nod and he called to another cashier, positioned him behind the register as if to watch for invading vandals at the city’s gate, and gestured me to follow him. We walked to the back of the cafe brushing past black and white photos of Henry Kissinger, Boris Yeltsin and other great political giants (being humbled by diminutive cups of espresso) to a room perfumed with the scent of toasted wood and coffee. There a large, ominous machine stands next to piles of burlap sacks of silvery-green, raw coffee beans and a basket filled with kindling. Raimondo began to explain that this machine was used to roast their coffee beans and was modeled after the original coffee bean roasters used during the drink's widespread popularity in Italy at the turn of the century. Oak wood is used to gently roast, every three days, 300 kilos (about 661 lbs.) of 100% Arabica beans (the “champagne” of coffee beans) from Kenya, Costa Rica, Brazil and Columbia, for exactly 20 minutes. The mixture of the beans and the slow, gradual roasting produces a deep, complexly flavored coffee, and the oak adds a slightly sweet, smoky note as well. The beans are then very finely ground, so that the steaming they receive during the espresso making process produces a condensed, viscous liquid.

The espresso machines also play an important role in the flavor of the coffee. The machines remain turned on at all times during the six days of operation. Raimondo explained that allowing the machines to run constantly, maintains the exact temperature of the water used for steaming the ground beans, and makes for a consistently tempered and clean-flavored espresso. Further, as a result of their constant use, and meticulous cleaning, the machines don’t have a chance to build up residual oils and impurities that are extracted from the coffee grounds—the espresso machines at Sant’ Eustachio are subjected to such abuse that they must be replaced every two years.

Satisfied that he had given me sufficient information regarding the high quality of his coffee, I was led back to the front of the bar. A few questions had been answered: the types of beans used, the method in which they are roasted, even the manner in which the machines are maintained and how the coffee beans are steamed. Yet one question remained unanswered: out of the aggregate, how do they achieve that frothy, rich and spicy espresso? Raimondo, who must have read my mind, anticipated what was coming next and dismissively shook my hand. I took the hint, thanked him and left. Heading back to my apartment, I was amused by the fact that like his coffee Raimondo’s informative tour left me gratified, yet greedy for a little more....

Information on the History of Sant' Eustachio:

Georgina Masson, "The Companion Guide to Rome"
Posted by Brette A. Jackson at 8:43 AM